Is the token a cryptocurrency?, What is a token and what is it for?… Tokens arrived long before Internet, only now its use has expanded towards a more revolutionary conception and the new definition causes some confusion. Now we explain you what a token is, what it is for and the difference between token and cryptocurrency.

What is a token?

In the world of blockchain technology, a token is a unit of value issued by an organization. Tokens are are the representation of a financial value or digital asset.

The tokens can represent from currencies (cryptocurrencies), to any fungible or negotiable assets.

Is not a new concept

In a broad sense, the token is an object with a given value only within a context. A clearest example? The casino chips. These chips are pieces of plastic that are not worth anything outside the casino walls, in this context it is precisely where their value is agreed and they end up being the representation of something.

So, historically tokens have been objects used as coins with value within a given environment. Another example can be found in music festivals, the vast majority of festivals work only with their own token with value within the precincts.

Therefore, the value of a token is which its creator decides.

The special feature of tokens is that they are based on a third-party blockchain; requires from a blockchain -not own- to work. In addition, tokens allow designers to decide their object, content and consequences.

The most common means for creating tokens is the Ethereum platform, from which smart contracts are executed. On this decentralized platform, developers design their applications or contracts on a personalized blockchain.

In the Ethereum ecosystem, tokens are known as ERC-20; It is one of the most used tokens in the crypto world.

However, is possible to make a type–token distinction:

Those who generate expectations of obtaining economic benefits. Used as a way of investment.

Those who don’t generate expectations of obtaining economic benefits. Oriented to offer a concrete utility in a platform or application, which give rights to the use of certain products or services.

Those that represent the possession of an asset, be it a debt, company shares etc.

What is the difference between Tokens & cryptocurrencies?

Once the question about what is a token is resolved, is important to clarify the following -and also important- question: What is the difference between tokens and cryptocurrencies?

We summarize it by highlighting differences and similarities. 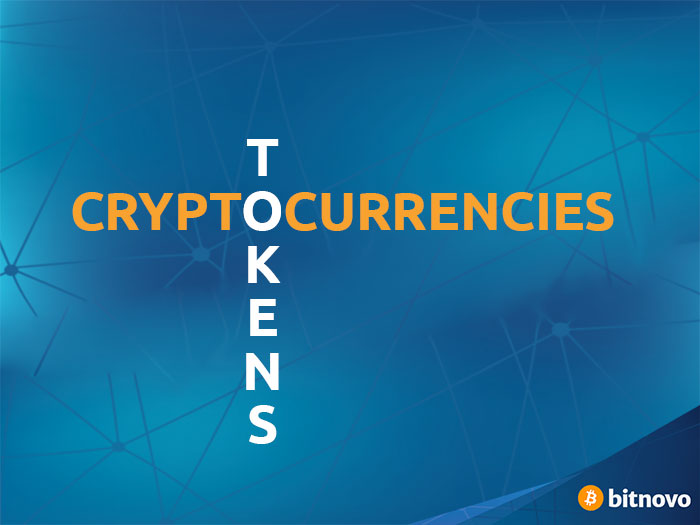