One of the main characteristics of cryptocurrencies is their decentralized nature, that is, they are not controlled by any entity or institution such as a government or central bank, but that work through the consent of the nodes (computer) which are part of the blockchain network of that currency.

Decentralization is a feature that helps achieve high levels of privacy and security, feature that do not have trust currencies.

The DAOs are very innovative organisations whose main feature is their autonomy, that is, they can operate without humans.

Daos have no offices, no employees, no managers. This type of organization is based on smart contracts and blockchain technology and works with algorithms who perform all their functions without human intervention on the basis of codified rules that offertransparency, immutability, autonomy and security to the entire ecosystem.

A decentralized autonomous organization represents a revolutionary innovation in the design and operation of organizations and its purpose is to automate decisions, facilitate cryptocurrency transactions and implement multiple functions who currently realize professionals and big companies.

But before we delve into how a DAO works, let’s see below the origin and history of The DAO.

History of The DAO

The DAO is a decentralised and transparent investment fund, based on lines of code, launched in the blockchain Ethereum in 2016.

In the DAO, anyone could propose a project and seek community funding. If a consensus of more than 20% was reached, the requested funds would be transferred in ETH to the applicant’s management.

The project was very successful as more than 11,000 investors bought participation tokens on the platform that gave them the right to vote on projects, to finance them and to receive benefits. By the end of May 2016, more than $150 million had been raised in ether (ETH).

In June 2016, due to vulnerabilities in its code, The DAO was breached, resulting in the theft of 3.6 million ETH.

This led to a hard fork of the blockchain of Ethereum, in order to restore the stolen funds.

Since not everyone agreed with this decision, there was a division of the network into two blockchains: Ethereum and Ethereum Classic, from which the ETC token was created.

In 2014, Vitalik Buterin, co-founder of Ethereum,in the article ‘DAOs, DACs, DAs and More: An Incomplete Terminology Guide’, published on the blog of Ethereum.org, explains the meaning of concept of DAO, defining it as:

“It is an entity that lives on the internet and exists autonomously, but also heavily relies on hiring individuals to perform certain tasks that the automaton itself cannot do.”.

The DAO was an organization conceived to be automated and decentralized, with the idea of being able to eliminate human error or the manipulation of investor funds, putting decision-making power in the hands of an automated system and a collective collaboration process.

The use cases of a DAO are very different and they range from running a business, an organization, to a state or nation.

As the name suggests, a DAO has 3 main features, that make them different from other traditional organizations:

In addition to these 3, the DAO have other very interesting features:

All these features, make the DAO transparent, decentralised, uncensorable and autonomous.

How a DAO works

A DAO is neither more nor less than a democracy running on a blockchain. Given the innovative nature of this organization, Below I’ll show you how a DAO works step by step.

In the DAO, each share or vote is represented by some form of transaction on the Blockchain, while the members are represented by addresses. These addresses may be owned by a human being, a robot, an IOT device or even another DAO.

Difference between traditional organisations and DAO 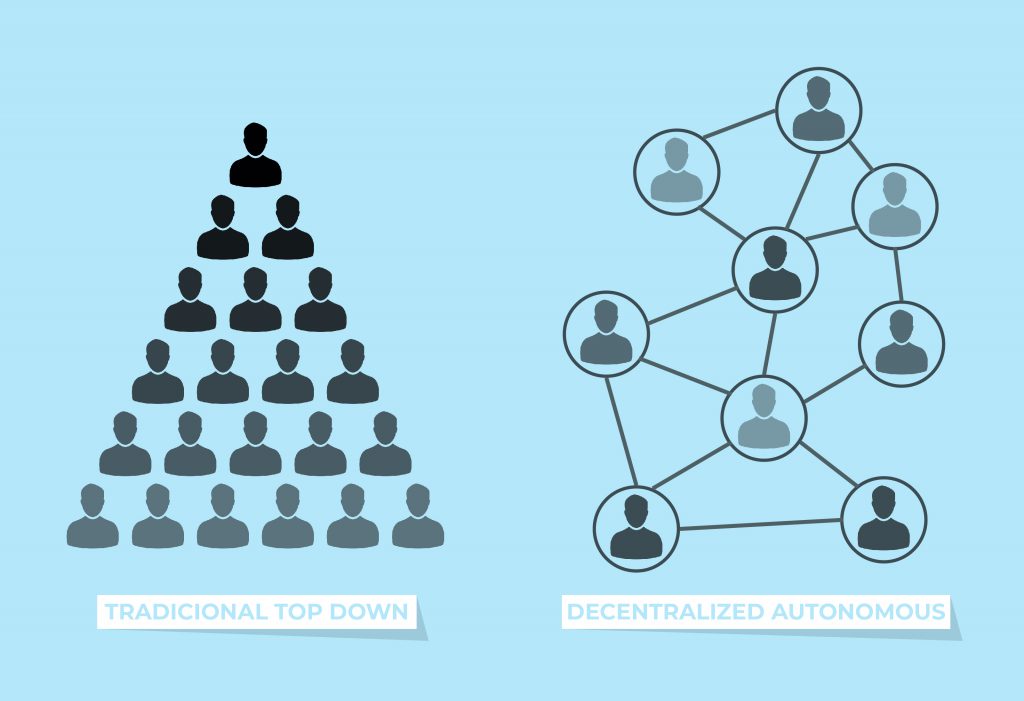 To better define a DAO, it is very important to understand the difference between a decentralized autonomous organization and a traditional organization.

Below I’ll show you the main differences between DAO and Traditional Organizations. 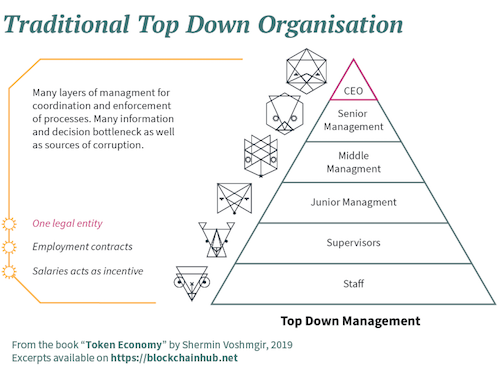 3. A traditional organisation is a legal entity. Instead a DAO does not have a centralised legal entitya. In traditional companies, all employees of a company have employment contracts that regulate their relationship with the organization and with each other. Their rights and obligations are governed by legal contracts while in a DAO they are not bound by a legal person since esta it uses smart contracts. 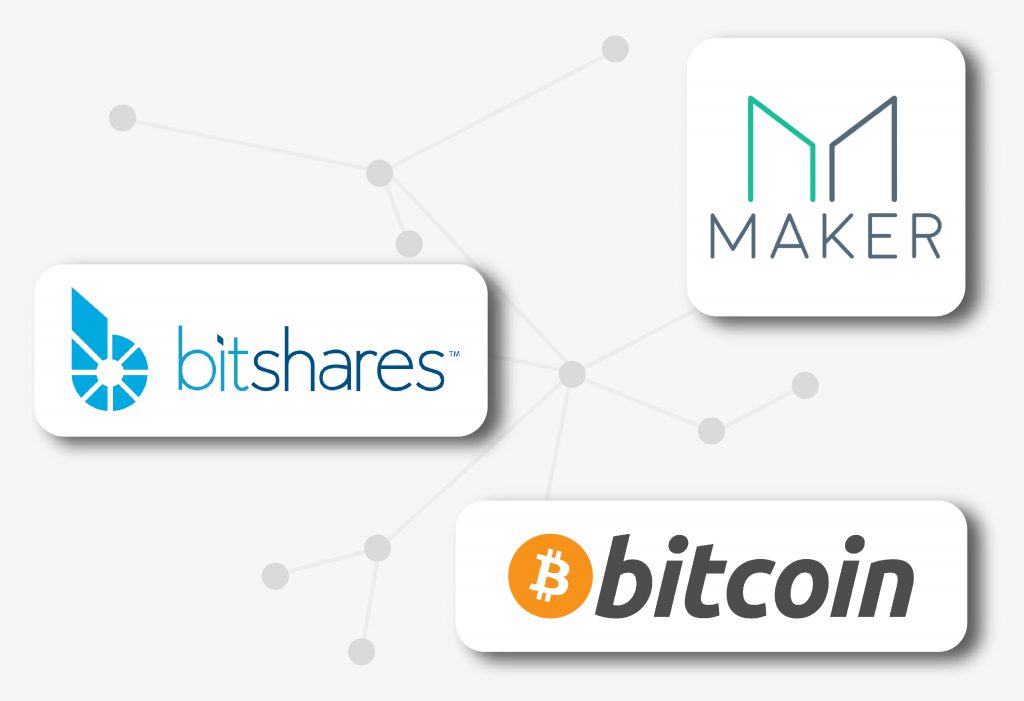 The Bitcoin network can be considered the first example of DAO, being the first organization truly decentralized and autonomous and coordinated by a consent protocol.

Bitcoin is not controlled by any central entity and its blockchain protocol is based on a network of incentives, linked to its cryptographic token (BTC).

As in any type of DAO, consensus-based governance rules allow for the automated and transparent coordination of a group of people who do not know or trust each other and who operate according to rules whose compliance is encouraged by proof-of-work algorithm (Pow) that guarantees network security.

Makerdao is regarded as the project that laid the foundations for the Decentralised finance or Defi.

Allows users to create CDP (collateralized debt position) to withdraw a stablecoin called DAI, as a loan. Lenders can earn interest on the funds by contributing to a mutual fund, which is provided to the borrowers. Tokens Maker (MKR) allow cardholders to participate in governance and vote on changes to the stability rate.

Created by Dan Larimer, Bitshares is a decentralised exchange platform allowing to operate with cryptocurrencies without leaving the blockchain. Its goal is to destabilize the way we currently buy and sell cryptocurrencies.

Unlike bitcoin, BitShares’ main goal is not to be a peer-to-peer currency, but rather a complete trading system with security tokens (such as BitUSD or BitGold) linked to real-life assets.

HOW TO CREATE YOUR DAO

If the DAO project seemed interesting to you and you are wondering how to join a DAO or even how to create your own decentralized autonomous organization, you are in the right place.

I will explain below how and where to create your DAO.

To do this, you can use various options such as, for example, the platforms of: Aragon, Colony and DaoStac.

Aragon is an open source blockchain project that allows users to build and manage their Daos.

Aragon allows you to collaborate with people from all over the world and work to achieve common goals, share benefits and participate in group decision-making.

In addition, on this platform you can monitor how funds are used in the community.

Colony Network is an operating system for open source and modular organizations, a set of smart contracts running on Ethereum. It provides a general framework for the essential functions required by organizations, such as ownership, structure, authority and financial management. It allows users to customize their DAO with smart contract forms. 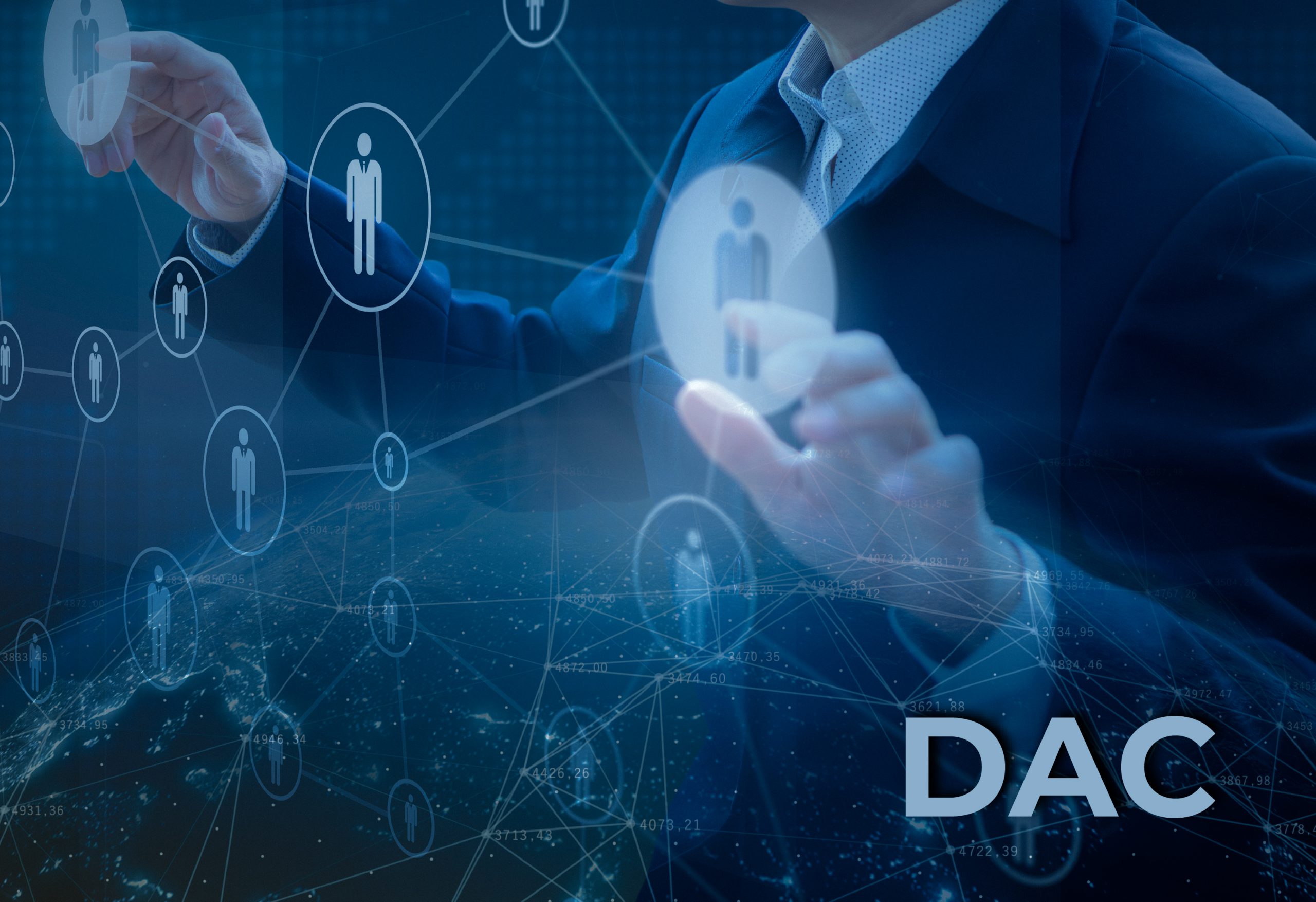