Skip to content
Every time the price of Bitcoin goes up, it becomes more difficult to get access to buy even a few satoshis. Luckily, there’s also the option to get them through fun Bitcoin winning games that in 2020 will allow you to enjoy yourself while increasing your portfolio.
How much can you earn? I’m not going to lie to you. Tyler Winklevoss didn’t become a millionaire playing these games, but if you’re consistent and the price of Bitcoin reaches the numbers we all expect, it’s sure to be worth the time invested.
In a way, it’s the same logic that applies to a Bitcoin faucet: What you earn today seems like little, but in the future it could be a lot of money.
Kryptomoney, especially Bitcoin, isn’t like fiat money, and Bitcoin is a thousand times more likely to increase its value than the dollar, even more so in this day and age when the ink can’t print that many bills.
Anyway, the important thing here is that you say welcome to this gamer spirit and that you wear out the letters on your keyboard by putting Bitcoin together with these fun games!

Bounce means bounce in English and that’s exactly what this game is about to win BTC where you must handle a small Bitcoin (ball) that will bounce on different blocks. Your objective will be not to fall to the void in the attempt, and collect all the THNDR Tickets that you can.
The more tickets you get, the more chances you have to get satoshis that are given out every day at 18:00 UTC. Among the daily prizes there are one of 5.000 satoshis, another of 2.000 satoshis and one of 1.000.
In total each giveaway awards 49,250 among the users that the winners will have to claim to receive in their Lightning Network purse. Wallets accepted include Wallet of Satoshi, Breeze and BlueWallet.
Just look at the user reviews on Google’s PlayStore to know that the public really enjoys Bitcoin Bounce.
At the moment, Bitcoin Bounce can be downloaded from both iOS and Android and is limited to the United States and the European Union although it is preparing for global expansion in the short term.

We could call it the “Fortnite” of Bitcoin games. The reality is that it tries to simulate this kind of mutiplayer royal battle games, but this time with rewards in bitcoins.
Players can win bitcoins instantly as they kill opponents and all game items have values that users can consume or simply exchange for rewards using Lightning Network.
The game also works on the concept of scarcity, associated with Bitcoin and its 21 million emission limit. According to the statements of its creator Carlos Roldán in the LNConf: “In the Lightnite store the skins are limited. Hats, glasses, backpacks all have a limited amount per season. When you play in normal mode you put on your bought skins and play with them and at the end of the game you still keep them and can use them always”,
However, when BTC is involved, things change.
“It’s more competitive and attractive. The skins, when you lose in the game, they stay on the floor of the game and when a user looses and survives the whole game he keeps the loot of others whose value is directly affected by the amount of these items and if no one picks it up and survives then a unit disappears. Here comes the concept of scarcity. 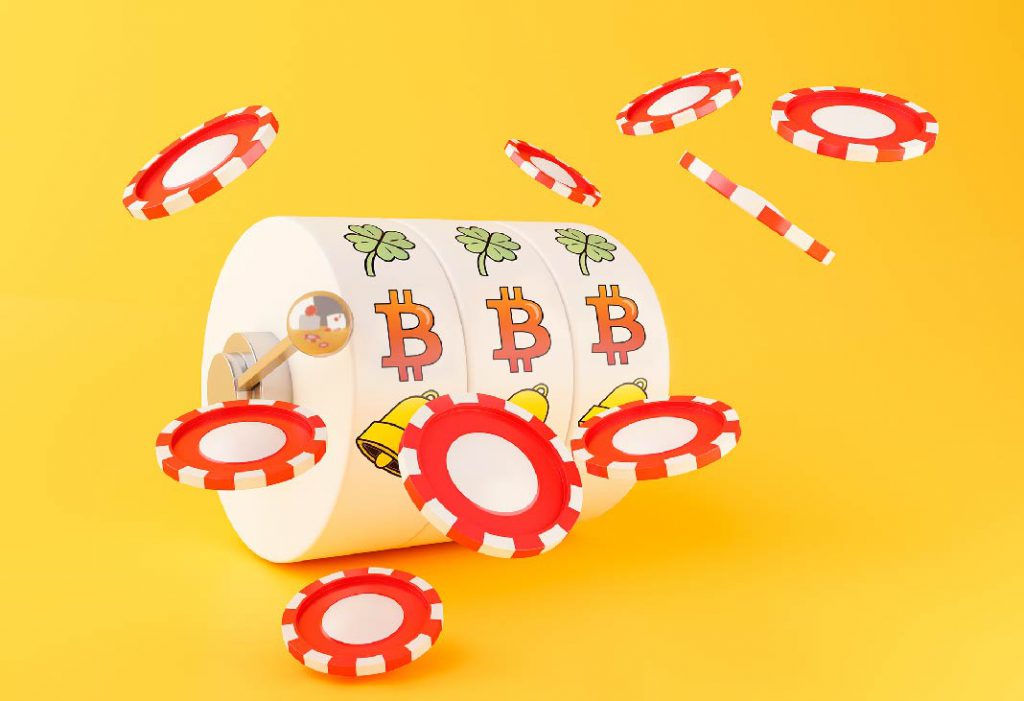 This is one of the most popular casino game platforms with crypts, with a wide range of slots, table games, poker, live games, etc.
In total there are more than 1800 games, where you can bet, win, lose, curse Bitcasino and his mother, or just have fun winning crypto coins.
In Bitcasino, besides finding games to win bitcoins, you can find games to win Ethereum, Ripple, Litecoin, Tron or Tether. Regarding the deposit of funds, they clarify that it’s simple and many FIAT coins are accepted to play (even the Japanese Yen).
There are also daily promotions for players, cash prizes, free spins, bonuses and even travel tickets to different destinations around the world.
Another way to win crypts they propose is an affiliate program with an outstanding profitability that can reach up to 45% in the distribution of income. This depends on how many people you are able to direct to the Bitcasino site.

Those who have played or are playing Age Of Empires will love Golden Towns because in this game to win BTC we will have to manage a city, make it grow, construct buildings, and we can also attack other opponents to steal their resources. But be careful, that also implies that we must be prepared to defend ourselves from some attacks, so don’t fall asleep.
This game is developed by the studio Anno Labs, which has already stood out for the creation of Anno1777 with which it managed to distribute more than 300,000 euros among its players.

Golden Towns also has a referral system that allows you to earn 10% in fees when your referrals reach level 2. And to give you an idea of how important commerce is in this game: referrals can be bought and sold, and the profits are passed on to the new owner.

How to earn money in Golden Towns?
You can specialize in growing your city, your stores and be a great manager. As you get “virtual gold” in the game, you can sell it on the web market to different exchanges.
You can also be a warrior and dedicate yourself to getting that “virtual gold” like the pirates did long ago. Attacking cities, forcing them to pay your taxes, etc. This will depend on your profile as a player, if you like action or stability.

Pirates of the Seed

Created by Rodolfo Andragnes, one of the referents of the crypto world in Argentina and founder of the NGO Bitcoin Argentina, Espacio Bitcoin Buenos Aires and laBITconf.
The good thing about this new and fun initiative is that it’s a game to win Bitcoins that doesn’t require a high level of knowledge in the field, but simply a computer or smartphone and internet access.
From time to time, from this website, the possibility of stealing a treasure in Bitcoin is activated and to do it you need to decipher 12 riddles (words) that require all your intelligence, intuition and insight.
Guessing the riddles and winning bitcoin is not a matter of knowing the cryptic world, but of developing lateral thinking and starting the engines of creativity.
I want to make it clear that I myself am one of those “pirates” who came close to stealing the treasure of Pirates of the Seed, even though I have not yet managed to solve all of Captain Hash’s puzzles.
That was all for today, and now I just hope that when you discover the treasure, steal some city, win at roulette or be the champion of the Fornite for Bitcoiners you remember this little article from the Bitnovo blog that I’ve written with so much love for you.
(After these words, a tear falls down my cheek but I immediately regain my composure).