Skip to content
f you’ve ever wondered what a Bitcoin UTXO is, you’ve come to the right article. Here we meet all those who do not know or at least those who do not have it sooo clear.
From its acronym, UTXO is complicated and this in English means Unspent Transaction Output. You will wonder where the X is and I will tell you that it is because Transaction covers both T and X.
These Unspent Outbound Transactions (in Spanish) play a fundamental role in the operation of Bitcoin, mainly at the network security level.

UTXO the unspent exits of Bitcoin

To understand what a UTXO is in Bitcoin we need to know that every transaction carried out is made up of one input and two outputs.
The entry indicates the money we use to carry out a transaction.
The first exit is directed to the person to whom we send the transaction and becomes their entry.
The second output is directed to a direction of change. This operation returns us the surplus of the transaction that has not been spent.
Then, as the name indicates, UTXOs are the outputs of a transaction that have not been spent and that return the change that corresponds to us for an operation carried out.
What we previously called “second exit”.
If it still seems like I’m speaking Chinese, I’ll explain it with an example:
Winnie the Pooh has 100 BTC in his wallet and wants to send 8 BTC to me
because he is very happy with how well I write Bitnovo articles.
So Winnie sends the 8 Bitcoins to my wallet address and it automatically creates an input (of its 100 BTC) and two outputs (8 BTC for me and 92 BTC as change for Winnie).
Finally we have that Winnie the Pooh has gone from having 100 Bitcoins to 92, which have been confirmed by the exchange transaction and the UTXO that originated it.
We can also see that I have happened to have 8 BTC (entry to my wallet) thanks to Winnie’s UTXO. Those 8 BTC that I now have are my own UTXO that I can spend however I want. 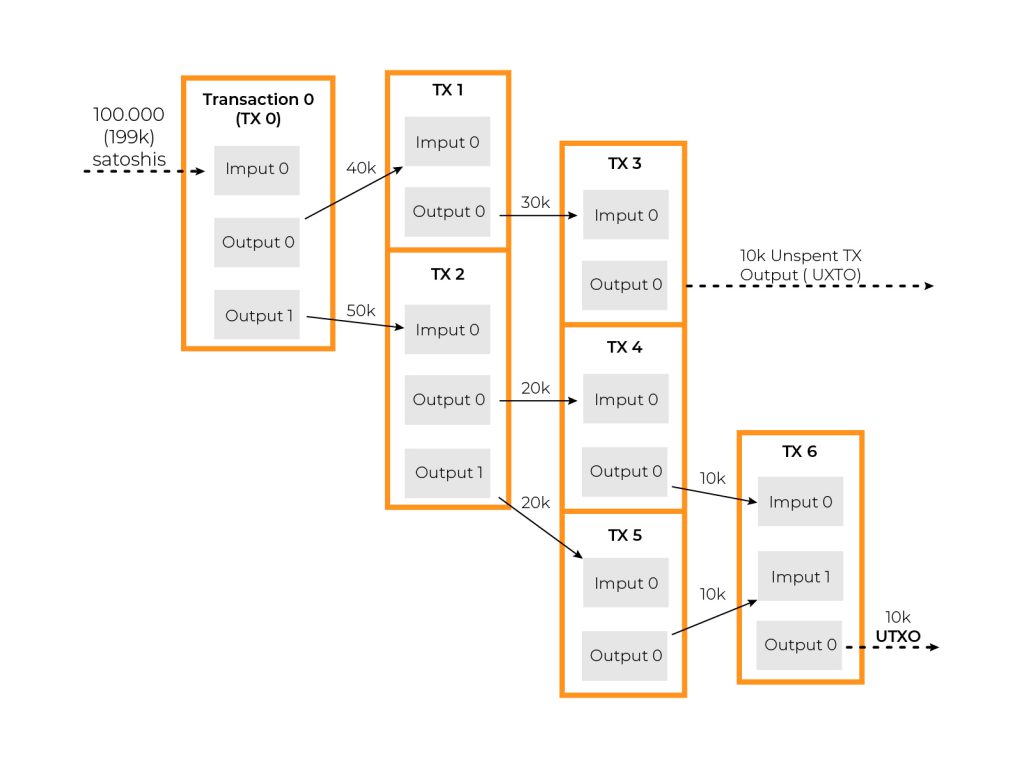 UTXO and its relationship with commissions in Bitcoin

If you have ever seen the details of a Bitcoin or other crypto transaction, you may notice that there is a slight difference between the balance of the inputs and the outputs. This is called a commission and it is a fee that is intended to compensate transaction miners for protecting the network.
This serves as an incentive for miners to assemble blocks, solve “proof of work” algorithms, and add new blocks to the chain. Although the commissions are not mandatory, it is likely that if you do not pay commission your transaction will not be mined since it does not represent an incentive for the miners.
In summary, the account would be like this: Total input – Total output = Commissions
This mechanism applies to all Bitcoin transactions and has two objectives:
– Encourage the work of miners by giving them incentives.
– Prevent the network from malicious attacks such as DDoS, dusting, etc.
That is why UTXOs, in addition to being a very useful accounting resource, also help to improve the security of the Bitcoin network.