An Introduction to Ethereum

The Ethereum was a nice idea in the start, invested and got some profit and it sounded safe, but there was a problem with the transactions, and the hackers did not wait, they took advantage and got a lot of money, then they needed to decide.

continue for the core of cryptocurrency philosophy? or just fix a bug and roll back the block chain, so that no one would lose a lot of money. so, they split the block chain in half, one half stays with no update and it will get the name of Ethereum classic, and the who ones get the other half of the block and get to update and fix the bug, it’s called Ethereum.

ETC vs ETH – The Ideological Split

The Ideological Split comes when a hacker discovered a loophole. There are 2 groups, team A only wants to stay true with the philosophy of the immutability of the blockchain. And team B they want a rollback the transactions and get their money back, this clash of ideas caused the separation of Ethereum

When Ethereum is split from Ethereum Classic, classic loses the updates that were created for Ethereum as they were not compatible, Ethereum Classic is still a decent crypto, but it is not what it could become taking advantage of its full potential as it ended up being Ethereum that did not let a mistake delay its progress.

ETC vs ETH – The Differences

The main difference that caused the split was that Ethereum Classic stays true with the philosophy of the immutability of the blockchain.

Ethereum improved its mining algorithm, added confidential transactions, also managed to invest the DAO Hack and return the money to those who lost it, it has most of the founders of Ethereum 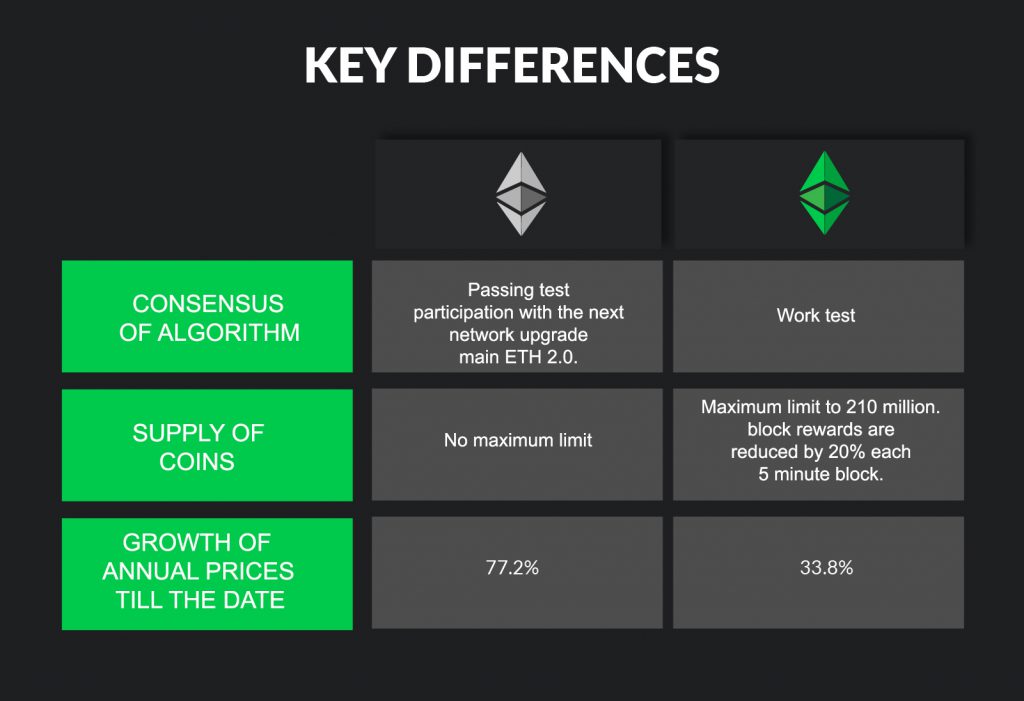 What is DAO? “Decentralized Autonomous Organization“ was a smart contract, He said it would revolutionize the way we think about Ethereum. The idea of this contract was to be a decentralized venture capital fund. It will invest in others decentralized applications and earn some profits for the initial investors, this was seen as a revolutionary idea, and got a lot  of founds in the first month.

It have a function where if u are not Sure about and investment u can opt out and get your Ethereum back, and  it’s called “split function”  but there was some loopholes where the hackers could  just  extract funds, and was never corrected  led to the division of Ethereum and they split into Ethereum (new) and Ethereum classic (old).

The DAO Hack – The ETC vs ETH Origin

The hackers found a critical flaw in this system where they could take away 11.5 million, this was a heavy impact in the Ethereum community, the hacker had 28 days waiting period to retire the funds, the clock was ticking.

In this period  they had to think what they could do, the community had separate decisions one half say the code is the law and the other say lock down the founds and  don’t let the hacker make any move in any transaction, they found a solution  a soft fork  the hacker the soft fork is a change to the software protocol where only previously valid blocks and transactions  are made invalid but is backward-compatible, but the hacker could just make a lot of transaction and cheat the network.

So they need to implement a hard fork that is a radical change to a network that makes previous blocks and transactions invalid or vice-versa. This required all users to upgrade their software, this hard fork only was implemented on the block that was prior to The DAO Hack, and blocked 1.920.000. After this, Ethereum and Ethereum classic get different paths.  The founders decided to go to the new Ethereum, and they learned from his past mistakes.

ETC vs ETH – The Issues

As in any fight, it is always the opposite who is to blame in this one, it is no different since between Ethereum Classic and Ethereum each throws the blame on the other.

The community fears that more hard forks will be implemented in the future, this could cause a substantial change in how Ethereum would work today.

My final thoughts on the Ethereum Classic and Ethereum fight, Most of the public would choose Ethereum for its quantity of improvements, also that it is a suitable option when investing, although they betrayed their values ​​it shows that nothing stops them to improve the quality, it should also be noted that they faced the hack that He divided them and managed to, recovering part of the losses.

It can be said that for not being for the hard fork the Ethereum community would not be where it is today.

And most importantly, the community that managed to make the best of a bad situation they were in, and continues to create new projects that can be the tomorrow of the industries.