What is Ripple and how it works

Each cryptocurrency, such as Bitcoin, has its own function and purpose. Ripple has also been designed for a specific purpose. If you want to know what is ripple, how its blockchain works and where to buy XRP, keep on reading.

Ripple (XRP), is when we write this post, the fourth largest cryptocurrency in the world, in terms of market capitalisation.

If we want to summarize the function of XRP in a sentence we will say that Ripple sells its services to banks and financial institutions.

In reading this, anyone who knows a little about Bitcoin would be surprised, knowing that the first great cryptocurrency in history has as its main characteristic to be decentralized and not to be subject to the control of institutions and governments. So, as you can imagine, the purposes of XRP and Bitcoin could not be more distant.

While Bitcoin was created with the aim of creating a completely new financial system, Ripple, creating its digital token XRP, seeks to help existing financial systems and improve their capabilities for global transactions.

The company that developed the XRP cryptocurrency describes it as a “digital asset built for global payments“.  Nowadays it can be very expensive to send money around the world and banks charge exorbitant fees. In addition, with outdated systems used, payments can take up to several days to reach the recipient’s bank account.

So the cryptocurrency Ripple (XRP) is designed to address this problem by allowing sending large sums of money safely and quickly at low cost.

This not only has the potential to help consumers making daily transactions but it is also a highly beneficial tool for the same financial institutions that are eager to use it.

According to the creator team of the Ripple cryptocurrency, XRP offers many advantages over other established digital currencies and over Bitcoin itself. Considering that it can take over an hour for BTC transactions to be cleared and around two minutes for an ETH payment to be successfully completed, XRP payments are cleared in less than four seconds.

In this way Ripple represents a possible solution to scalability problems.

XRP or Ripple: What’s the difference?

You will have seen that when we talk about Ripple, we often use the acronym XRP.

If you still don’t know what it means, XRP represents the digital currency of Ripple.

The digital currency, XRP, serves as a bridge currency to other currencies, without discriminating against fiat currencies. This means that Ripple facilitates the exchange of any currency with another.

Ripple is instead the name of the technology company Ripple Blockchain Labs Inc.’ who created the cryptocurrency XRP in 2012. Ripple provides the infrastructure to facilitate faster payments that characterize this digital currency.

The Ripple currency has a maximum supply of 100 billion tokens and the company owns about 60%.

How does the Ripple Blockchain work?

Now let’s explain how Ripple works and what are the features that make this cryptocurrency a unique digital asset.

Ripple is better known for its digital payment protocol than its cryptocurrency XRP.

Ripple operates on a decentralized open source and peer-to-peer platform that allows seamless transfer of money in any form: USD, yen, litecoin or bitcoin etc…

We can say that Ripple is not involved, like other cryptocurrencies, in the physical sending of money from one place to another. Rather XRP allows payment promise transfer.

The Blockchain of Ripple can be defined as a REAL TIME GROSS SETTLEMENT– (RTGS), a currency exchange and remittance network.

The most distinctive feature of the Ripple Blockchain is in its construction patterns. This system is built on an open source distributed protocol. That is, it supports tokens representing fiat currency, cryptocurrencies, commodities, and other units of value.

That’s why Ripple’s Blockchain is very useful for financial and institutional actors like banks.

To better understand how the system works, let’s take a practical example in which the two actors live in two different countries, with different currencies.

We imagine that Paola lives in Florence and owes money to her friend Luca, who lives in England, for a holiday they will have to book.

To avoid exchange rates and long transaction times, Ripple is used as a form of payment.

Paola will convert her euros into XRP through a gateway and Luca will be able to receive the RPXs and convert them into pounds.

Thus, the difference between the trust currencies and Ripple is that, while with fiat money high commission levels are applied, gradually eroding the value of the funds sent, with the Ripple currency this problem is solved. 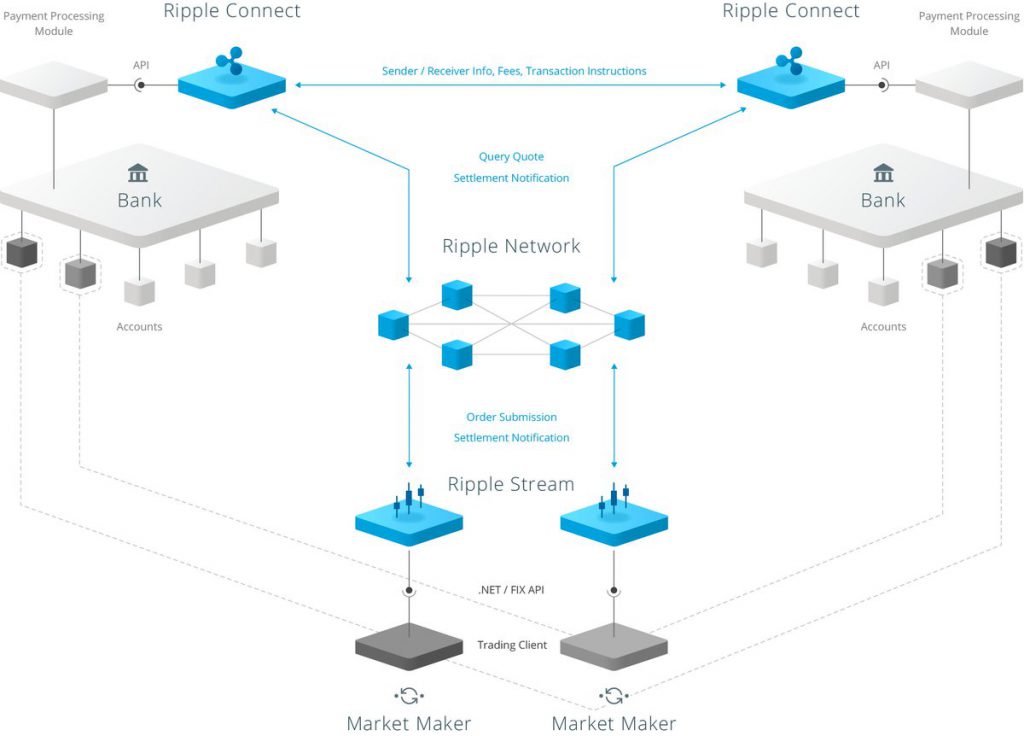 From the example above you can see that, to start a transaction, trust is required. Trust is represented by IOU credits (I Owe You) that represent real currencies that are converted into real money through Ripple gateways.

Ripple in fact uses a medium known as Gateway that acts as a link in the chain of trust between two parties wishing to carry out a transaction.

The Gateway therefore acts as a credit intermediary that receives and sends currencies to public addresses on the Ripple network.

Any company may register and open a gateway allowing the registrant to act as an intermediary for currency exchange, maintenance of liquidity and transfer of payments over the network.

Another important feature of the Ripple network is that it does not work with a proof-of-work system like bitcoin or a proof-of-stake system like Nxt.

Ripple’s network uses a unique distributed consent mechanism through a network of servers to validate transactions, which allows to avoid double spending.

Through a survey, the servers or nodes of the network decide by consent about the validity and authenticity of the transaction.

Confirmations are instantaneous and take about 5 seconds.

Ripple keeps track of all IOU in a certain currency for any user or gateway. IOU credits and transactions that occur among Ripple portfolios are publicly available on Ripple’s consent registry.

But even if the financial transaction history is publicly recorded and made available on the blockchain, the data is not linked to the ID or account of any individual or company.

So, as we have seen, Ripple infrastructure is designed to make transactions faster and more convenient for banks, making it the most popular cryptocurrency option for financial institutions.

This is why the Ripple payment system is increasingly used by banks, compared to Bitcoin, which is used as a digital currency primarily by individuals and organizations.

Is investing in Ripple worthwhile?

When we talk about investing in Ripple, it’s important to know what makes this cryptocurrency so different from the others. XRP is a cryptocurrency created to fill a unique niche in the financial world since it is a tool that serves banks.

While Bitcoin and other cryptocurrencies want to replace or surpass banks, Ripple wants its token to be used by banks to transfer value across borders, quickly and easily.

As you can see, the XRP token, created by the American company Ripple, is one of the greatest cryptocurrencies on the market, and is a coin that operates in a truly unique way compared to other coins.

Ripple allows cheaper and faster transfers than its competitors. The Ripple network allows a user to end an exchange within 3 minutes, reducing transaction costs and time spent by 45% -75%.

The group behind Ripple is focusing on 1500 transactions per second in the not too distant future, a value higher than what rivals are currently able to offer.

The primary objective of the company was to create a payment system that would have been used by banks to facilitate the transfer of funds both in international and domestic markets.

Today, many financial institutions have already started to use Ripple.

Ripple is therefore one of the most promising digital currencies and its work suggests that in the future the company will continue to develop and create new and better technologies.

For this, and for the features described above, we believe that investing in XRP is an interesting opportunity.

Where To Buy Ripple

If you want to buy Ripple in Italy, we advise you to do this by paying with cash.

If you don’t know yet, Bitnovo is the first brand that gives its users the opportunity to buy XRP cash at physical stores.

The system is quick and easy.

All you have to do is download the free Bitnovo App, available for iOS and Android or browse its web page.

Find the nearest Bitnovo shops on the map.

Once you find the store, you can request a voucher with the amount you want to buy.

The voucher must be redeemed with XRP on the app or on the web of bitnovo, in the section: redeem voucher.

In the process you will be asked the type of cryptocurrency you want to receive, the number of wallet in which you want will be sent the amount of XRP corresponding and a number of PIN that you will find on the ticket of the voucher.

In a few minutes you will receive your XRP on your wallet.

Now you know… Buying Ripple in Euros has never been easier 😉 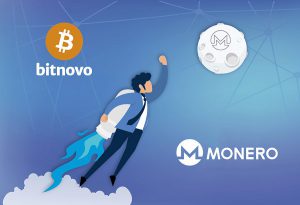 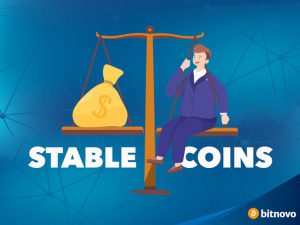 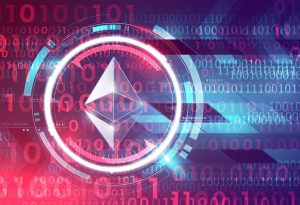